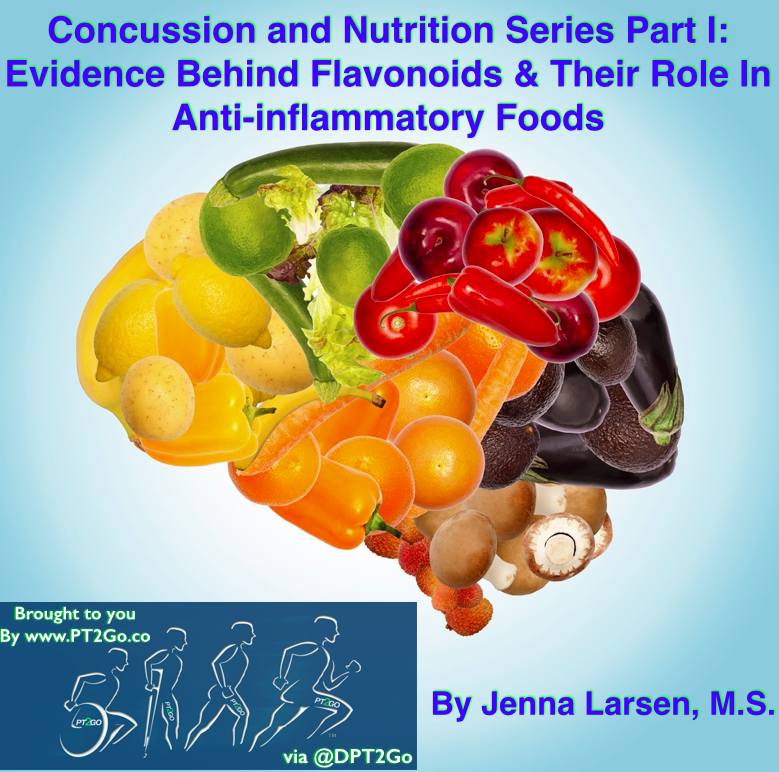 Concussion and Nutrition Series Part I: Evidence Behind Flavonoids and Their Role in Anti-Inflammatory Foods 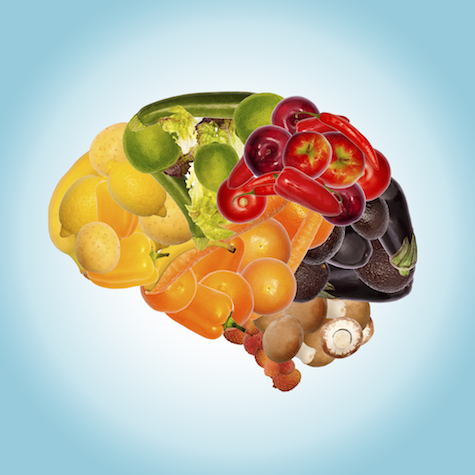 When you visualize concussion treatment, what comes to mind? Physical rest? Cognitive rest? Pain relievers? Limitations in physical and social activity? Eating the right foods? I’d venture to guess that the latter is not on your list.

How can a traumatic brain injury (TBI) respond to food? Visualize treatments for cardiovascular disease and diabetes. Do nutritional interventions come to mind? I’d speculate that they do. The events happening in the body after a TBI are not all that different than many other chronic diseases. The common links are oxidative damage and inflammation. There is a growing body of evidence supporting antioxidant and anti-inflammatory diets as a way to prevent complications associated with traumatic brain injuries.

Let’s take a moment to understand oxidative damage and inflammation in the context of a concussion. After a TBI, an inflammatory cascade is set off as a healing mechanism. Although beneficial in the short-term, the inflammation can persist while the healing effects do not. This creates oxidative stress as too many cell-damaging free radicals lead to tissue damage and eventual cell death. In the case of a concussion, cognitive problems are common long-term complications [1,2].

Diets rich in antioxidant-rich foods may be useful approaches to promote protective mechanisms associated with TBI [3]. There is promising research that foods high in the class of compounds called flavonoids act on the inflammatory cascade and are linked to improving cognitive performance and lowering the risk of Alzheimer’s-a brain disease with similar symptom presentation with deficits in memory and thinking skills.

Flavonoids are the pigments that give fruits and vegetables their color. They are the main reason why fruits and vegetables are considered to be so healthy. There are over 4,000 compounds considered to be flavonoids. The more deeply colored the fruit or vegetable, the more flavonoids it provides. They are also abundant in garlic, teas, spices, nuts and beans.

How Do Flavonoids Work in the Brain?

Flavonoids are antioxidants that are also anti-inflammatory. In a human randomized controlled trial, the flavonoid resveratrol, was shown to exert anti-inflammatory and anti-oxidative stress in humans [4]. Flavonoids, like all antioxidants, work by stopping free radicals from damaging cells, including neurons. Flavonoids are neuroprotective because of their ability to turn down inflammation and increase cognitive function via two processes. The first is by preventing the neuronal cell death that occurs during the inflammation-signaling cascade. The second is to induce the blood flow needed for new nerve cell growth to prevent or reverse loss of cognitive performance [5].

Consuming flavonoid-rich foods has been associated with the delayed onset of Alzheimer’s disease, while some studies have linked them to improved mental function [6-9]. Although the research specifically linking brain traumas to flavonoids is at an early stage, we know that a diet rich in fruits and vegetables is invaluable for health and to prevent other inflammatory-related diseases (i.e. cardiovascular disease, diabetes, cancer). If not for the long-term, the short-term effects of eating the foods that are high in flavonoids will at the very least help the concussed patient have higher energy levels, to combat fatigue and to feel as well as possible.

Since fruits and vegetables are healthy and also high in flavonoids, it should follow that flavonoids are also healthy and the more you ingest the better off you’ll be. Shouldn’t flavonoid supplements be a fool proof way to make sure that you get enough of them? It is important to consider that we don’t yet know how the body responds to the high blood levels reached all at one time when we take a supplement. Visualize how flavonoids enter the bloodstream through healthy foods eaten consistently throughout the day- the spike in the bloodstream is never reached to that same level as when a supplement is taken.

It is also important to understand that fruits and vegetables have thousands of phytochemicals, many of which we have not even been identified. So taking one type of flavonoid in high quantities is unlikely to have the same health benefits as eating the whole food [10]. There is no such thing as a ‘silver bullet’ and we have to be very careful when choosing to supplement, especially when little is known about safety, contraindications, interactions, or effectiveness. Save your money and invest in colorful, delicious, flavonoid-rich foods instead.

When it comes to flavonoids, more colors mean more antioxidants. Here are some quick ways to add flavonoids to your day:

4. Use sweet potatoes in place of the white variety